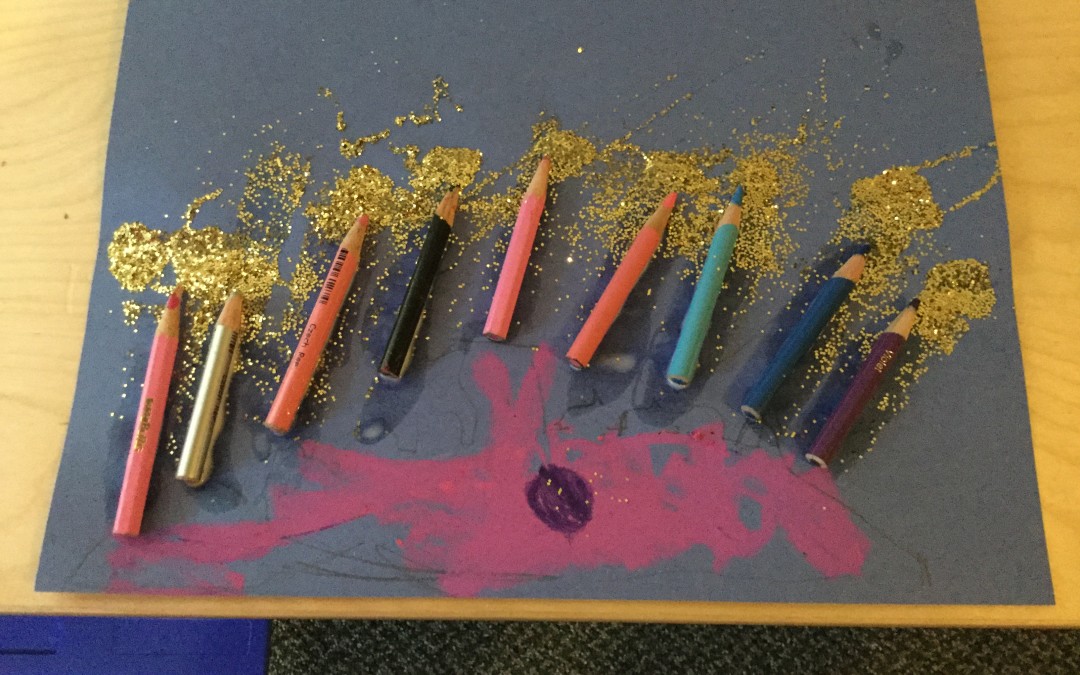 Midday: It was so nice to come back to school and see the children’s happy faces! They all seemed to have a wonderful Thanksgiving spent with family and friends!

Knowing that there are three weeks left until the break and there is so much to squeeze in, I introduced Hanukkah today, a week early. I read the children a book called My Hanukkah by Tomi de Paola and then lit the first candle on our menorah. While we were watching the candles burn we sang a little song called Burn little candle, burn, burn, burn…and watched the candles burn down during lunch. I also showed a Dreidel Three Parts Work and then I introduced our letter of the week: ‘k’. Our collection of objects was rather small: key, kazoo, a picture of our states Kansas and Kentucky, our lower case ‘k’ and our upper case ‘k’ and kite. Our mystery animal of the week was kangaroo.

Afternoon: I showed three Hanukkah related works today: one was a Star of David Tracing work with the metal insets, the other was a Dreidel Symbols tracing work and the third was the Dreidel Game that the children may play with pretend gelt.

Morning: Music with Jan! Jan has been teaching the children lovely Hanukkah songs!

Midday: We lit the second candle on our menorah and sang Burn Little Candles. Then I showed a Hanukkah Numerals and Quantity Matching work using Hanukkah related objects and our sand paper numerals. Finally, I handed it over to Natalee for her weekly Spanish lesson. Today she revised the numbers from one to ten using our colored bead chains and she also reviewed the colors she had introduced in the previous weeks.

Afternoon: I showed the children how they can make Hanukkah pop-up greeting cards, which I have a feeling will be a favorite throughout the week. Then I showed a game called Castel Logics that promotes spatial awareness and problem solving skills.

Morning: We lit our third candle on our menorah, and then I handed it over to Emily, Hazel’s mom, who came in to school today to tell us about Hanukkah. She told us that long, long time ago, the Jewish people lived happily in a city called Jerusalem and she showed us a lovely building made of Duplo blocks and some Duplo people to represent the city and the Jewish people. The Jewish people lived happily in Jerusalem because they could speak their language, they could wear clothes they wanted to and eat food they liked. However, when a king called Antiochus came to rule over their city, he did not let the Jewish people speak their language, wear clothes they wanted to or eat food they liked any more. The Jewish people were sad and many of them left Jerusalem. But there was one Jew called Judah, who stood up against Antiochus and he said he is not going to follow his orders. The other Jews liked Judah, and called him Judah the Maccabee, because he was as strong as a hammer. Emily actually did bring in a hammer to demonstrate how strong hammers are. Judah and his followers told Antiochus to go away and let the Jewish people live in peace. Antiochus did leave eventually, but he destroyed Jerusalem and the beautiful temple the Jewish people had built. The Jewish people got together and started re-building their city. At the end of their hard work they wanted to light the oil lamp in their temple, but they only had enough oil for one day to last, and it took eight days to make oil from olives. However, a miracle happened! Instead of one day, the oil lasted for eight days without burning out! The Jewish people remember the miracle of the oil to this day, by celebrating Hanukkah. During Hanukkah they light a new candle each day in the menorah, until all eight candles are lit by the last day of the holiday. They also play dreidel games and eat latkes (potato pancakes fried in oil) with apple sauce or sour cream. At the end of her presentation Emily and Hazel passed out a dreidel and a chocolate gelt to each child.

What a great presentation, Emily and Hazel! We loved it! Thank you for sharing your traditions with us!

For the rest of the morning Jan turned into a latke chef and fried the potato pancakes that the children mixed for themselves from grated potatoes, chopped onions, egg, pinch of salt, chopped parsley and matzo. When they were done the children could choose if they wanted to have their latkes with apple sauce or sour cream. Most of the children loved their latkes and gobbled them all up!

Midday: I read a book called Latke and Applesauce, an enchanting Hanukkah story about family, traditions and generosity. Then I showed a sensorial sorting work where the children sort geometric tiles according to shape, size, color and thickness.

Afternoon: I showed a work called The Table of Pythagoras which is a hands-on, visual representation of the mathematical concept. Then I showed a Menorah collage work.

Midday: After lighting the fourth candle on our menorah and singing our song, I told a Hungarian folk tale I grew up with called The Little Rooster and the Turkish Sultan. I love telling this story not only because it brings back sweet memories, but because its catchy chorus line automatically invites the children to chime in and participate in the process of story-telling with great enthusiasm. I also showed a sensorial Montessori work where the children match wooden cylinders that weigh the same.

Afternoon: I showed a beautiful calming work called Color Tablet Box 3. The box contains 9 sets of colors. Each color consists of a set of 7 tablets of different shades of that color. The children arrange each color set from lightest to darkest shade (or the other way around) around a plastic circle that holds a candle in the middle. When all the shades are sorted we light the candle and sing a song about colors or just sit and enjoy the sight.

Midday: I was very excited today to call an early circle because on our calendar it said ‘St. Nicholas Day’. Saint Nicholas Day is celebrated in many countries in Europe on December the 5th. St Nicholas was a bishop who lived in the 3rd century in Myra, which at that time used to belong to Greece but today it belongs to Turkey. Nicholas’s parents died when he was still a teenager and he inherited a lot of money. However, he gave all that money away to the people who needed it. St Nicholas was a very generous person and liked to help others in need in secret. The story goes that there was a widower in town who had three daughters. Back then in order to marry young girls needed to have a dowry for their future husbands. If the parents could not provide a dowry for their daughters, the girls would have to become slaves. The poor widower did not have a dowry for his daughters. St Nicholas heard about this and over the course of three nights he visited their house and each night he threw a bag of gold through their windows. The bag of gold landed in the girls’ shoes drying in front of the fireplace. With the bag of gold for each daughter the widower could marry his daughters and they were saved from slavery. Today on St. Nicholas’s Day children receive small treats like chocolate and oranges in their shoes or stockings. St Nicholas looks similar to Santa Clause the American children know, often carrying a staff.

When I was a child my family always looked forward to St Nicholas’s Day. On the night of December 5th my sister and I would polish our shoes or boots until they were sparkling clean and then we would leave them in the window sill hoping that St Nicholas would visit during the night and leave us some treats. My sister and I must have been really good kids because when we woke up next morning, we would always find treats in our shoes!

So today at circle I passed out a cotton ball to each child to take off one of their shoes and polish it super sparkling clean! When they were done they took their shoe to the Practical Life room and left it there until the end of circle in case St Nicholas might pass by.

When we all went back to circle I introduced our artist of the week, Marc Chagall. Since we were honoring Hanukkah all week I decided to present an artist whose paintings are full of lovely images of his Jewish background. When you look at his paintings you cannot not hear the heart-warming Jewish music in the background or feel the strong and magical sense of community of the tiny Jewish town of Vitebsk where Chagall grew up. I showed four paintings by Chagall and the children were excited to discover all the strange but funny dream-like elements Chagall hid in them, such as goats playing the violin, people floating around, houses and people being up-side down, angels playing musical instruments and even a self-portrait with SEVEN fingers! At the end we looked at all the paintings displayed and concluded that Chagall’s favorite color must have been red, blue and green!

At the end of my art presentation we went back to the Practical Life room to check if St Nicholas came by. Some children said they heard some noises coming from The Practical Life’s direction, and guess what? St Nicholas did come by and left us each an orange and two Hershey’s kisses in our shoe! Oh, the excitement! I have to say, I am not surprised St Nicholas visited us; these children have been such good friends, good listeners and hard workers all year, they definitely deserved a treat! And they polished their shoes impeccably clean!

Afternoon: With all the excitement of St Nicholas we realized we forgot to light the candle on our menorah, so we did it in the afternoon. There were five candles, plus the Shamash on our menorah and it looked beautiful! After that I showed a math work for practicing addition skills up to 9. The children were also finishing many of the Hanukkah projects they had started earlier in the week.

What a busy and exciting week!

Have a lovely weekend,