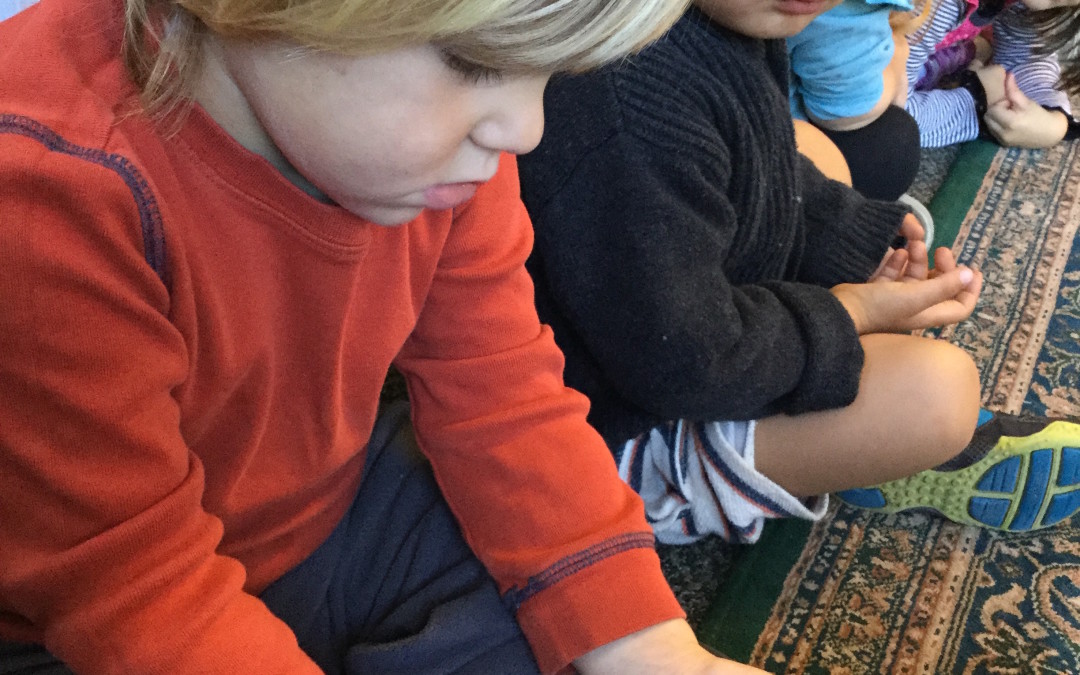 Midday: In my weekly art presentation I focused on Piet Mondrian (1872-1944) and his art work. Mondrian was born in the Netherlands and he showed great talent for art from a very early age. He used to draw and paint alongside his father, who was a qualified drawing teacher, and his uncle, who was an artist. Mondrian initially painted in the impressionist style. When he moved Paris he got introduced to cubism, which had a great impact on his style. I showed the children one of his early experimental works called Evening: Red Tree, 1908-10, depicting a tree only painted in the three primary colors: red, blue and yellow, which later became Piet Mondrian’s trademark and made him so well-know all over the world. Then I showed the children how Mondrian took this idea further, and developed his signature style, endless number of paintings consisting of a black grid, with individual rectangular or square shapes colored in red, blue or yellow. I took a piece of paper, a ruler and a black marker and showed the children how they can make a grid. Then I chose which enclosed space to color and made my own Mondrian-inspired painting! The children will have a chance to create their own Mondrian-inspired paintings throughout next week.

Afternoon: As Halloween is sneaking upon us, the children will be busier and busier engaging in fun Halloween projects! I showed a Haunted House craft work today and presented the Witch Stew work where the children fish out stew ingredients from a black cauldron filled with green sparkly water. Then they will inventory the number of each ingredient and write up the recipe for the witch stew. I told them they should ask you to cook this recipe for dinner on Halloween nightJ.

Midday: I presented our new letter of the week: ‘g’. The objects I found for the sound ‘g’ were the following: glove, glasses, golf club, ghost, grill, goose, gorilla, and goat. Then I carried out an operation that put a lot of pressure on me. I moved our chrysalides into our butterfly habitat! It’s not as easy as it sounds, you know. You have to be very careful how you transfer the chrysalides that look so fragile hanging by only a tiny thread of silk from a piece of paper! However, I found out that the thread is much stronger than it looks! Those little creatures built themselves a pretty sturdy house. Anyway, I performed the delicate operation without losing any of the chrysalides. One chrysalis had fallen off its thread earlier in the week, but I transferred that one to the habitat too, and placed it on the floor. We’ll see what happens. The children are super careful when they are walking around the habitat and know to be very quiet and gentle while they are watching our chrysalides inside which new life is being created. When our butterflies hatch we’ll collect flowers and leaves for them and place drops of sugar-water on them to feed on. After about 3-5 days we’ll release our butterflies and wish them good luck.

Afternoon: I chose to present only one new work today since our p.m. classroom already looks and sounds like a very busy workshop! I showed a Halloween Stamping work where the children can choose to make a cat, ghost, a pumpkin, or all three of the images if they wish!

Midday: I showed the rest of the Geometric Solids: the ovoid, the ellipsoid, the rectangular prism, the triangular prism, the square-based pyramid and the triangle-based pyramid. Then I handed it over to Natalee for her Spanish lesson. She revised the primary and secondary colors with the children and added the rest of the colors, such as white, grey and black. She also showed a lovely book making work in Spanish with pictures of our color tablets that the children will color and label in Spanish. Thank you, Natalee!

Morning: Music with Jan! Keep your ears open for the fun Halloween songs Jan is teaching the children, like the ‘I am a Little Pumpkin’ or the ‘Halloween Cat’ chant and many, many more!

Midday: Today the children had a chance to practice their rights as citizens of a democratic country and voted on what kind of features to carve into our class Jack-o-Lantern. They could choose if they wanted triangle shaped or square shaped or circle shaped eyes, and they could also chose the nose and the mouth too. Our Jack-o’-lantern turned out to be such a happy fellow! I even carved ears for it too, the way Jan showed me last year. Then, we read a book about the life cycle of the ladybug, as one of the ladybug pupae that Caroline brought in from her own garden hatched! It was very exciting!

Afternoon: I showed a geometric solid coloring-cutting and pasting work and then to celebrate our ladybugs hatching I presented the ladybug tossing work where the children toss ladybug beanbags onto a huge leaf made of felt and then add up all the dots of the ladybugs that landed on the felt, count their scores and record it onto a graph.

Morning: We had a very exciting morning! The Insect Discovery Lab visited us to tell us some more about insects! Their representative, Annie, brought us some real bugs that the children could pet if they chose to and hold very carefully!

The first insect Annie presented was the Darkling Beetle, a California native bug. It had a beautiful shiny hard shell called exoskeleton (many of us petted) to protect himself from predators. The hard shell makes it impossible for birds to be able to pick up the insect in their beak. The Darkling Beetle has another trick: when in danger it may do a hand stand to look bigger to scare its enemy off.

Then we moved to the other side of the country, to Florida, to meet the Eastern Lubber Grasshopper. As its name suggests this grasshopper is so lazy, it was totally safe for us to have it visit our school, it didn’t even contemplate hopping away. However, to ward danger off, it has a secret message encoded in its body through its coloration. Black, red, yellow and orange (the colors making up its body) stand for: “STOP! Don’t eat me! I taste yucky. I even may be poisonous!”

Next, we traveled to South Africa, to meet the Giant African Millipede. What a fun creature! The millipede’s body consists of sixty segments, and each segment has four legs, two on each side, as opposed to centipedes that have two legs per segment, one on each side. That altogether, is 240 legs! No wonder it feels like a walking toothbrush when you hold it on your palm! Annie pointed out that millipedes are not insects, but arthropods. If you were wondering how to tell if a creature is an insect or not, here is the checklist for the insects:

Whenever you doubt, just go through the checklist.

After South Africa, we moved on to the rainforest of Northern Australia to welcome our next guest, the Australian Walking Stick. As tough and prickly as it looks, when we petted this insect, we found out it actually has a very soft body. So how does it protect itself from being eaten by predators? I uses mimicry: it curves up its tail to fool its enemy into thinking it is a scorpion! And last, but not least, Annie presented her last guest, the Madagascar Hissing Cockroach that felt too cozy with us and let out only one very faint hiss. The Madagascar Hissing Cockroach uses its hissing sound to mimic snakes in order to ward off danger. Clever, isn’t it?

We had so much fun getting to know our insects better, holding them and petting them and finding out all those interesting details about them! The children were so patient and respectful towards the animals and asked many great questions! Hopefully, they are going to teach you something new you did not know about insects!

Midday: For our weekly oral story telling I chose a Halloween-themed paper cut story called the ‘Little Witch and her Little Orange House’. It is a lovely story about a small witch who is looking for a house to spend the winter and when she finds a piece of orange paper blown by the wind, she turns that into a house with a pair of scissors and some snips here and there. As I tell the story, I use a piece of orange paper and cut some shapes into it for the roof, the window and the door. At the end of the story I fold out my paper and it shows a Jack-o-Lantern!

Afternoon: We went to the library to pick some books and hear fun Halloween stories from our librarian, Erica.

Morning: We had our Halloween parade! Oh, those costumes were truly magnificent! I loved them all! Thank you for putting so much effort into dressing up your children and making the time to come with us on our parade! I hope those paparazzi photos turned out really cute!

Midday: For my art presentation I introduced the Mexican artist, Frida Kahlo. I told the children about Frida’s life and showed paintings that she painted. The children especially loved her self-portraits with her pet monkeys and parrots. I briefly told the children how people in Mexico celebrate The Day of the Dead and how they love to use decorations of skeletons and skulls. I showed a Frida Kahlo painting of a little girl wearing a skull mask and then I showed how they can make their own skull masks from white paper plates and collage materials. The mask making work will be available in the art room throughout next week.

Afternoon: We had a fun, chilling afternoon after all the excitement of the Halloween parade in the morning. I had previously frozen our pretend plastic insects in egg shaped muffin tins in colored water and the children had to excavate these insects by using an eye-dropper and salty water, and a Popsicle stick for a chisel. When they were done, they had to identify their insect and match it to a picture on the insect chart. Great fun!

What a busy and fun-filled week!

Have a wonderful weekend,