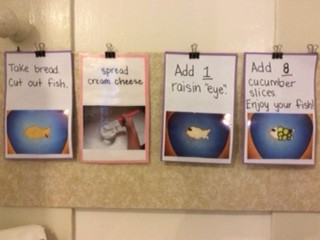 Tuesday: AM: We had an early circle so that I could show the children our special art project

for the week, painting a real fish in order to make a colorful print. At first the children were not

so excited about seeing a dead fish up close, but their enthusiasm grew as the began finding all

the fins and could make them move and identifying the lateral line and other parts they know.

Over the next few days they will each have a turn to create their own beautiful print. This is

obviously a time sensitive project and I will warn you, their work of art might be slightly aromatic!

circle, I showed the Power of 2 bead chains. This is an interesting work to learn skip

square form. They then count each bead and match a small ticket with the matching numeral at

the end of each bar, and can then skip count by reading the tickets. I am always pleased with

how popular this work becomes. What’s not to like, the beads are colorful and the concept is

added 5 more. We even learned how to say farm animals in Spanish, animales de granja.

PM: I first showed an option to record the skip counting patterns as they work with each chain.

the child first counts the chain and adds the numeral tickets,

and then circles each numeral in the matching color. They can then read them and also see the

We then spent most of rest of the afternoon creating a poem together, entitled Winter is…

them using the moveable alphabet. Their spelling is inventive, meaning they form the word with

just the sounds they hear, for example, snow is spelled sno.

The complete poem and their lovely illustrations is posted in the lobby, check it when you have

Wednesday: AM: The children are buzzing with excitement as they practice the songs for our

upcoming performance. The theme of Love & Friendship is so appealing and provides them

1) The life cycle and migratory pattern of salmon. Salmon are anadromous, born in

freshwater, migrating to live most of it’s life in the ocean and then returning to spawn in

freshwater. Most salmon are able to return to the exact spot where they were born,

depending on olfactory memory. I shared the nomenclature cards naming each basic

stage in their life cycle and when they migrate. I then showed a brief video of a salmon

run as they journey upstream with the help of fish ladders. The power of their caudal fin

(tail) is amazing as they jump up each level.

function of the clock hands and how to tell “o’clocks” when the minute hand is on the 12.

They were quickly able to read the time, even the very tricky 12 o’clock, when the hour

hand is hidden by the minute hand.

PM: We reviewed the life cycle of a salmon and then I shared the option to make a book with

I also demonstrated making a book of all the o’clocks, using a clock face stamp to which the

child can add both the appropriate hands and label it with the words.

1) Mirror polishing, which is a multiple step process for cleaning a mirror using water and a

cleaner. The child does the work and then prepares it for the next

person by getting fresh supplies, Montessori ecology in action!

2) Small scale sweeping, using a tiny dustpan and broom to sweep large beans into a tape

rectangle on a tray, and then sweeping them up and back into a small dish. The care of

movement and satisfaction when finished is enticing to little hands.

We remembered the important work of Dr. King and others in changing the bad laws of

segregation. I explained that young children just like them had also helped to change these

I then told the true story of Ruby Bridges, a courageous young girl who was one of the first black

children to integrate an allwhite

school in New Orleans. She was able to endure months of

and from school. Her teacher could not understand how she could remain so calm and focused

each day after having to see and hear such hurtful things. All the other children were held out of

school in protest, so Ruby was all alone in the classroom as she learned to read and write.

One day, as her teacher was watching from the classroom window, Ruby stopped and seemed

to speak to the crowd, even though it enraged them all the more. Once in the classroom her

teacher asked her why she spoke to the mean people, and she explained that she wasn’t

speaking to them, she was praying for them. She was asking God to forgive them, just like he

had forgiven the people who said mean things about him long ago. She explained that each

forgiveness. Her teacher now understood that this was how Ruby able to be peaceful and

loving in the face of cruelty and hate.

The children broke into spontaneous applause for Ruby at the end of the story!

PM: The children had a fun storytime at the library with our librarian buddy, Erica. Her theme

was winter weather and clouds, perfect for these el nino soaked days of late!