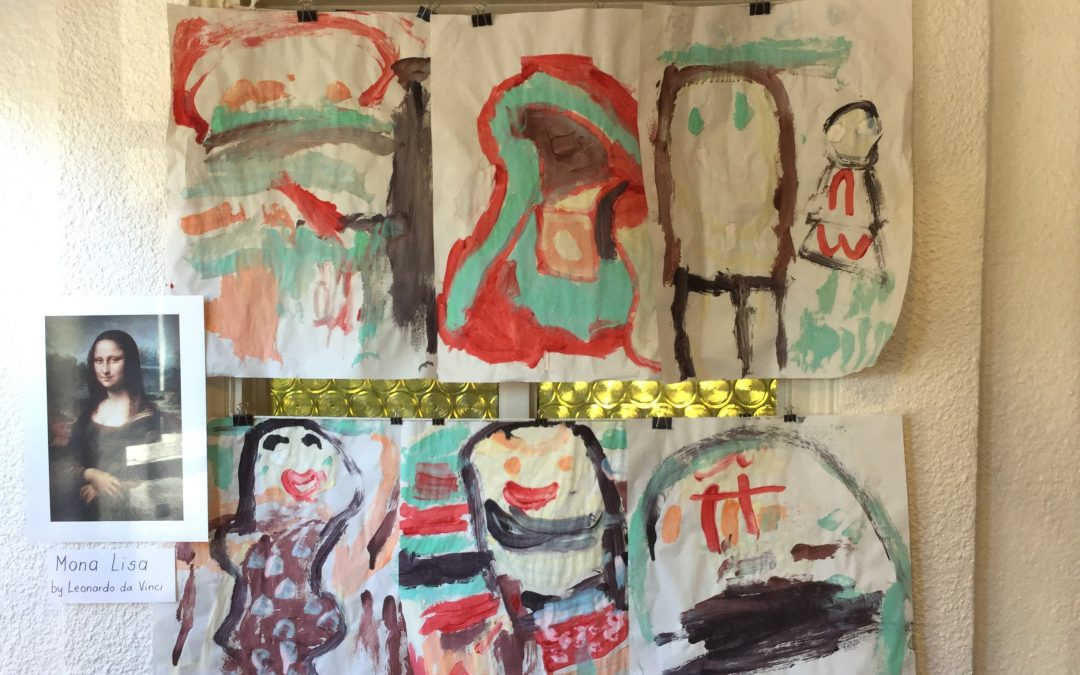 Midday: Our art presentation focused on a traditional art form of the northern regions, like

Alaska and Canada: called ‘Inuksuk’. Inuksuk or in its plural form Inuksuit, are renditions of a

of each other. In the barren landscapes of the North the ‘arms’ of the inuksuk would point

towards a good fishing, hunting, or gathering place or convey other fundamental messages to

travelers. After showing several pictures of inuksuit, I showed the children how they can make

their personal inuksuit from a collection of various rocks and slates.

and colors represent on them. This brought us to our continent puzzle map and our discussion on

how the land on our planet Earth has been divided into the seven continents: North-America,

Pm: I presented a painting of a winter landscape called A Winter Scene with Skaters near a

Castle by Hendrick Avercamp, from c.a. 1608-09. Besides it depicting a snowy scene, it is a very

busy picture full of things to look for and notice. It was painted by a Dutch artist who loved to

paint landscapes with lots of people in them. In this painting there is a city scene with a frozen

lake and people engaging in all kinds of activities, such as skating, snow-ball fighting, pushing

one another in a chair on the ice, etc. I also pointed out the solitary bare tree in the foreground

with its curvy, windy branches. The branches are all bare because the tree has lost all of its

leaves for the winter. I told the children it is such a busy painting, it would be a good idea to find

the following details on it with a magnifying glass when they have a turn with the art project:

• A person pushing another person in a chair on the ice

• A boat on the frozen lake

• Two children having a snow-ball fight

them. It is a two-day project. On the first day the children decide where they want their horizon

line and mark it in pencil. Then they paint patches of brown for the ground and leave the rest of

it white for the snow. Then they cover the sky with blue, red and purple to their taste. The next

their trees and blow on their blotch of paint through a straw to make the windy branches. They

may add additional branches and twigs with the end of their straw if they want. In order to create

the perception of perspective, the trees in the foreground will be bigger, whereas the ones in the

background will be smaller. I hope the children will have lots of fun with this art project!

Midday: Our letter of the week was ‘p’ and I found tons of objects starting with it: pot, pin, peg,

Pm: I showed a reading word where the children are supposed to match picture cards with their

labels of three-letter words. Each set of cards focuses on a different vowel. The children are

words. After our reading work we played a co-operative board game I designed for practicing

our fish facts. What a group of fish experts we have!

Midday: We had a fire drill mid-morning and I was impressed how well the children did walking

out of the building and into the street, to ‘our safe place’. Hopefully, we’ll never have to use this

skill for a real situation, but at least we know that the children are well-prepared for a case of fire

emergency. After the fire drill I showed a work called Large Hexagon Box which is a hands-on

existing geometric shapes; in our case using triangles to form a large triangle, a rhombus, a

hexagon, and a parallelogram. Then it was Natalee’s turn to have her Spanish lesson with the

children. She reviewed the names of farm animals and sang Old McDonald Had a Farm in

Spanish with the children.

Pm: I showed a math work today to re-inforce the concept of ‘greater than’, ‘less than’ and

‘equal’. Then we played another round of our fish board game to review all the things we know

Morning: Music with Jan! The children are having so much fun getting ready for the winter

performance! They even gave me a mini-presentation today of their favorite song! Super cute!

new furniture. The children were very excited about seeing all the boxes piling up by the

Midday: I showed a patterning work where the children match miniature dogs of various colors

in its spot. Then I showed a work that allows children to practice their cutting skills. We talked

pick up the scissors and cut with them. For now they will be practicing cutting narrow strips of

Pm: I showed an addition work with our colored bead bars. Then we practices some basic math

skill, like holding up as many fingers as the number I called out. For an additional challenge I

asked the children to hold up a certain amount on one hand, then another amount on the other

hand and then we added up the fingers held up on both hands. We had a lot of fun with this

Midday: I showed a traditional Montessori work called the ‘Dressing Frame.’ It is a practical life

work and its objective is to teach children basic elements of self-care, in this case, getting

dressed. The frames are practice boards for practicing buttoning, zipping, snapping, buckling and

Velcro-ing; anything that one might come across while getting dressed. Then I told a really fun

story called ‘The Squeaky Door’. The story has lots of repetitions and after a few rounds the

children were happily chiming in with the chorus lines.

Pm: Since the children had so much fun with the story of ‘The Squeaky Door’ I thought we could

do an impromptu theatrical performance and act out the tale. All the children had parts in the

story and they did so well! We had a lot of fun putting on a little show! After our artistic outlet I

showed the children a reading work where they look at picture codes, figure out what sound the

pictures start with and bring the corresponding letters over from the movable alphabet set. When

they have brought over all the letters they sound them out and act out what the word says. Here is

a picture clue for you to decode:

sound in pig is ‘p’, then you would be hopping on one foot now, because your word is ‘hop’.

Midday: For our Friday art presentation I introduced Leonardo da Vinci and his most famous

masterpiece, the Mona Lisa. First, I read a picture book about da Vinci’s life and inventions and

discussed how he taught himself about plants, animals, astronomy, architecture, engineering,

music and painting. Then I showed the children a huge print of the Mona Lisa and I asked them

to look closely at it. We talked about the composition of the painting, the famous technique

achieve his beautifully blended, mysterious surfaces. We also talked about the Mona Lisa’s

pose: her body is slightly turned away but her face and eyes are looking at the viewer. She is

wearing beautiful and expensive garments, fashionable for noble women of her time. She is

missing eyebrows and eyelashes; one of the theories says that women in those times plucked

got wiped off accidentally due to a cleaning process by not so skilled restaurators. Her hands are

folded over her lap in a calm and graceful way, suitable for a gentlewoman of her era. And then,

the smile of course! The smile that is just a curve of a lip, and a spark of mischief in her eyes that

are staring right at you! No wonder this painting has made the headlines so many times all over

the world! In 1911 it was stolen from the Louvre by an employee, an Italian patriot, who kept it

started working on the Mona Lisa, but when finished with it four years later, he could not part

with it. He took it with him everywhere he went and this is how, decades later, it ended up in

France where Leonardo died in the court of Francis I of France). We practiced posing like the

Mona Lisa and tried to smile with our mouths closed, teeth not showing. Then I showed the

children how they can paint the portrait of the Mona Lisa themselves. When I present a drawing

or painting project my objective is not to emphasize the likeness of the painting and the model,

but talk through my plan, decisions, choices and technical tips I am applying as I paint. For

example, I show them how to plan where the features will be placed in the paper, how adding a

background makes the portrait pop, how to add patches of light or shadows, etc. Finally, I always

like to point out that this is MY way of painting the Mona Lisa, and that I am sure all the

children will find their OWN way to paint it. All the final projects will look differently, because

we all see and feel things differently, and that is the beauty of art!

words and then place the labels on the corresponding objects around the room. Here are some of

amazingly well sounding out the words!

Have a wonderful weekend,